Oz and the Musical: Performing the American Fairy Tale 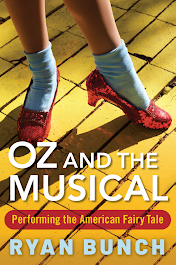 My new book, Oz and the Musical: Performing the American Fairy Tale considers the special relationship between Oz and Musicals in the US. Drawing on my experiences as a fan, scholar, and practitioner I argue that musical adaptations of The Wizard of Oz make the "American fairy tale" available as participatory culture. In return, Oz contributes to the musical's pedigree as an America art form. Along the way, I discuss L. Frank Baum's The Wonderful Wizard of Oz (1900), the popular Broadway adaptation of 1903, the famous MGM film, the stage and screen versions of The Wiz (1975 and 1978), and Wicked (2003). The book concludes with a chapter on home, school, and community musical performances of Oz. Central to these adaptive performances are the contributions of diverse American producers, performers, and audiences, including kids, immigrants, Black people, and queer people, who have expanded and transformed the American fairy tale through song, dance, and the gestures of musical theater.

The cover image is from photographer Carol Highsmith's America, which is curated by the Library of Congress. These ruby-slippered feet belong to Ashley Harkins, who plays Dorothy at the Land of Oz park in Beech Mountain, North Carolina.
Oz and the Musical is available for at Oxford University Press, or wherever you buy books.
Posted by Ryan Bunch at 5:46 PM No comments: