Reading and Singing Along to The Wizard of Oz

The first Oz thing I ever owned, long before I had any idea about collecting, must have been this read-along book and cassette tape: Superscope Storyteller's The Wizard of Oz.

Listening to this again, it occurs to me that my first awareness of elements of the story that are specific to the book, not the MGM film, was likely through this adaptation. Dorothy wears silver shoes, and the witch has one very powerful eye. I especially vividly remember the lion drinking his green liquid courage in this version. However, whereas these details are true to Baum's book, there are some peculiar differences as well. Dorothy has parents, rather than an Aunt and Uncle, and Toto is white in the illustrations. The story is more text-heavy than I would normally expect from this kind of product. The background score is richly orchestrated, showing some significant investment in the quality of the recording. The voice-over performances are informed by established expectations about many of the characters. Dorothy has an aw-shucks way of speaking that evokes Judy Garland in the film, and the Cowardly Lion’s voice involves a confluence of references to Bert Lahr, Snagglepuss, and Paul Lynde.

The really notable musical feature of the book/tape, however is a song the Munchkins sing when Dorothy sets of on the Yellow Brick Road, first heard at 2:42, and which is repeated (though not consistently) as she meets the other characters. Its words and music are an approximation of Arlen and Harburg’s “Follow the Yellow Brick Road” from the MGM:

It’s a pleasant, singable, and memorable tune, if highly derivative of the movie, which, unlike the elements from Baum’s book, is not in the public domain. It would appear significant that the impulse to sing and dance was considered a necessary inclusion in this adaptation. I wonder if this is because of the influence of the MGM film musical. Other adaptations of The Wizard of Oz to book and record also tend to incorporate songs, but this was common practice with many recordings of stories for children in any case. What is interesting about these book and record texts is that they combine reading with at least the evocation of embodied performance through song, dance, and play. The song is certainly catchy enough that one could sing along to the recording or sing it from memory later while skipping on down one's own imaginary Yellow Brick Road. Reading might be a more embodied experience than one would assume to begin with, but the ability to read, hear, and even sing and move with the story while reading it is a type of participatory and embodied reading that has perhaps not been fully investigated or appreciated--possibly because read-along recordings have not been not considered worthy of study. What are the forms of literacy that are being cultivated in this type of reading? What if we gave these books their due as literature? What are the complex ways in which this text references familiar elements of the book, the film, and musical theater conventions while forging its own version?
Posted by Ryan Bunch at 4:13 PM No comments: 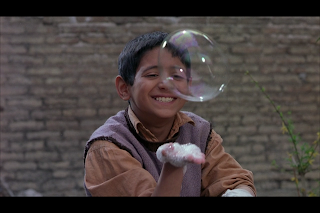 This scene can be further understood, perhaps, in the context of post-Revolutionary Iranian cinema. After the Revolution, the old studio system was dismantled and restrictions were imposed on the content of films. Adult men and women could not touch each other, even as actors, if they were not married in reality, and not only overt sexuality but also singing and dancing were eliminated (Cardullo, 111; Sadr, 228). Children in Iranian film, who are not bound by the same restrictions and are read as having a fundamental innocence, have more freedom and mobility that adults. According to both Sadr and Cardullo, children allow Iranian cinema to address social, political, and other themes under the inoffensive cloak of child innocence. As Sadr notes “children liberate plots by introducing non-essential actions [acquiring] a tone of elevated romanticism that their parents never have” (233). Like Ali, who is able to get work for his father, these children are more capable in the modern world than the adults and are portrayed as hard-working (Sadr, 231). Whereas adult emotion is limited, children show a platonic way of loving (235), which Sadr associates with Iranian cinema’s “poetic realism.” These films “converted the question ‘why do people feel this way’ to ‘how does it feel to have such feelings?’
Posted by Ryan Bunch at 9:29 AM No comments: