Mary Had a Little Lamb 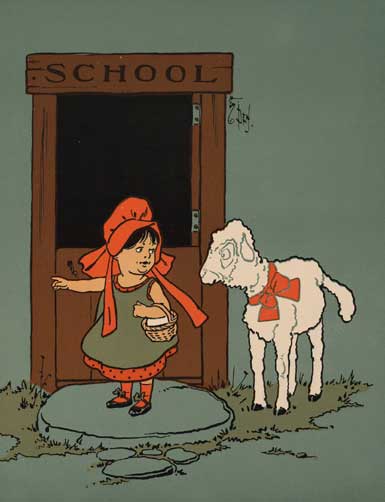 First posted on October 11, 2018.
"Mary Had a Little Lamb" is one of the first songs many English-speaking kids learn. The canonicity of the nursery rhyme is suggested by Thomas Edison's recitation of it on his first phonograph recording in 1877. It's the first "real" song many of us learned to play in music lessons.

The poem was published by Sarah Josepha Hale as part of a collection of children's verses in 1830. She had been encouraged to produce this volume by Lowell Mason, who led the founding of school music education in the United States. He was in search of material he could set to music for instruction, and he included "Mary's Lamb" in his Juvenile Lyre, Or, Hymns and Songs, Religious, Moral, and Cheerful, Set to Appropriate Music, For the Use of Primary and Common Schools. This songbook was used in Boston public schools and was probably the first such collection in the United States. Hale's verse is reportedly based on the true story of Massachusetts girl Mary Sawyer, who took her lamb to school and in whose honor the city of Sterling Massachusetts has erected a statue.

Lowell's tune, which is in a somewhat pedantic style resembling that of early American church music, did not really catch on. The tune that is familiar to us today--more directly appealing, vernacular, simple, and folk-like--became attached to the words in 1868 when H.R. Waite borrowed it from the chorus of minstrel man E.P. Christy's "Goodnight Ladies" (the original words were "Merrily We Roll Along"). Like so many tunes that have become standards of the children's music repertoire, "Mary Had a Little Lamb" has roots in blackface minstrelsy. This tune is so simple as to read like an exposition of the building blocks of music. The melody is almost entirely confined to the first three notes of the scale (Do, Re, Mi, easy as One, Two, Three) except for a brief leap up to scale degree five at the end of the first phrase. Even this motion outlines the minor third characteristic of much children's music and the pentatonic scale considered natural to children's musical expression.

Posted by Ryan Bunch at 8:31 PM No comments: