Composer-lyricist Charlie Smalls wrote "You Can't Win" for the stage version of The Wiz (1975), but it was dropped after the Baltimore previews. It originally appeared at the beginning of the second act, where it was sung by the slaves of Evilene, the Wicked Witch of the West. It was dusted off for the film version, where it replaced "I Was Born on the Day Before Yesterday" as the Scarecrow's introductory solo. Michael Jackson's performance in this role is considered by many to be the highlight of the film, and this song to be the highlight of his performance. My conversations with fans of the film, particularly in the Black community, suggest that this is one of the most popular songs from The Wiz, along with "Home," and although it goes against the licensing agreement, many school and community theater productions still use this song instead of "I Was Born."

Posted by Ryan Bunch at 2:03 AM No comments:


"But I Like You" is a song by Jeff Moss sung by Bert and Ernie. It first appeared in 1984 and takes place within a classic Sesame Street scenario--Ernie keeps Bert awake by talking and/or singing. This song belongs to a genre I think of as the Bert and Ernie friendship duet. There are only two or three of them, but they bring to the surface what is tacit in many of the other sketches involving the two friends--the intensity of their relationship, whether you think of them as friends, roommates who are almost like brothers, or even lovers. The Tin Pan Alley style of the song evokes the intimacy of the domestic sphere (indeed they sing to each other in bed) as well as the double entendres (exemplified by Cole Porter) that allow listeners to hear the song on multiple levels.


One of the first films ever exhibited in public stars a child, Andrée Lumiere. Repas de bébé (Baby's Meal) was one of the films exhibited by the Lumière brothers, Auguste and Louis, in Paris on December 28, 1895. This event, which demonstrated their new cinematograph, is often cited as the beginning of film as a public form of entertainment (the cinematograph had the ability to project its image on a screen so that it could be viewed by many people at once, unlike "peepshow" devices like Edison's kinetoscope). Andrée was the daughter of Auguste and Marguerite Lumière, who appear with her in the film. While her parents fuss over her, Andrée allows herself to be fed by spoon and makes a good effort at taking a bite from a solid food item. Because this film seems to record a slice of the Lumières’ real family life, this has been called the first home movie. Although the suggestion of naturalness is strong in the centrality of a baby and the breeze-blown trees in the background, it is, of course, a staged and performed scene. As surely as Auguste and Marguerite perform extra exuberance in feeding Andree while in front of the camera, Andrée delivers her own performance as she commands her parents' doting attention by her mere presence and alternately accepts and offers back her food props.
Posted by Ryan Bunch at 12:26 AM No comments:

Can You Tell Me How to Get to Sesame Street?


The Sesame Street theme song has opened the program since its first episode on November 10, 1969. The lyric, written by Jon Stone and Bruce Hart in collaboration with composer Joe Raposo, describes Sesame Street as a destination ("on my way to where the air is sweet"). Further, it is a destination sought by a speaker without knowledge of its location ("Can you tell me how to get, how to get to Sesame Street?"). The idea of a place "where the air is sweet" seems prompted by the pleasure of a "sunny day." That Sesame Street is kind of a child's paradise is further signaled by references to playing together and friendly neighbors. That it is a magical place filled with the wonders and imagination of the child is made more explicit by the seldom-heard bridge of the song:

The opening of doors refers to the inspiration for the name of the show in the expression "Open Sesame," familiar to many kids from the magical story of "Ali Baba and the Forty Thieves."

The world of childhood and the show's educational mission are implied by the music, which uses the most elementary musical relationships in its melody--"sunny day" and "come and play" are set to a falling arpeggiated triad with much of the rest of the musical phrase following scalar patterns. The song is sung by a chorus of children with light, treble voices evoking popular notions of innocent sweetness of childhood.

While Sesame Street itself is, to borrow an expression from Mr. Rogers, a "neighborhood of make-believe," the visuals accompanying the song suggest that kids can find the spirit of Sesame Street in their own neighborhoods and play activities. Kids are shown playing, mostly together but sometimes alone, in urban environments as well as parks and fields that may or may not necessarily be in the city. These images evoke the pastoral as well as the urban--bucolic scenes being especially associated with the Romantic idea of childhood as a thing close to the goodness of nature.

Alice's Wonderland: An Early Encounter Between Disney Animation and Its Child

Alice's Wonderland (1923), although it had been produced under Laugh-O-Gram films, was the first film shown to distributors by Disney Brothers Cartoon Studio, which became the Walt Disney Company. In this short, a little girl named Alice pays her first visit to a cartoon studio. The representation of a child as both observer and participant in the making of a cartoon intended for her amusement sets the terms, from this seminal moment, of the cultural work of the Disney empire. Knocking insistently, she finally secures Walt's attention and declares, "I would like to watch you draw some funnies." This statement encapsulates the entire significance of the Disney company, which positioned itself in the marketplace as the safe studio for kids and families, using animation as the medium of choice for demonstrating its child-friendliness and the figure of Walt Disney himself as its imprimatur. Self-reference, to Disney the man, to the studio, and to the technical arts of animation, are on display here, as they often are in animated shorts showing the artist at work and interacting with his creations. This kind of self-reference runs through the Disney corpus, with each film recycling images, tropes, and even specific animated movement sequences from previous films. Walt already is the avuncular figure that he would become to American audiences. The white page on which Walt has been drawing becomes the movie screen as the pictures come to life. Cats play in a band, visually representing in this silent film the important role music would play in future Disney productions. Then, Alice goes home and dreams that she travels to Cartoonland by train, a magical place where a kids' dreams seem to come true and easily seen as an analog to Disneyland. Alice's appearance as a live actor in this cartoon world suggests the immersion of the "real" child in the world of Disney. The dream takes a mild turn for the worse when Alice is chased by lions before waking up (Sorry the very end is missing from this video!). The framing of the adventure as a dream and the name of the protagonist suggest Lewis Carroll's Alice's Adventures in Wonderland (1865), the kind of fantasy story that, along with fairy tales, would form the backbone of Disney's repertory of animated features starting with Snow White and the Seven Dwarfs (1937).
Posted by Ryan Bunch at 1:43 AM No comments: 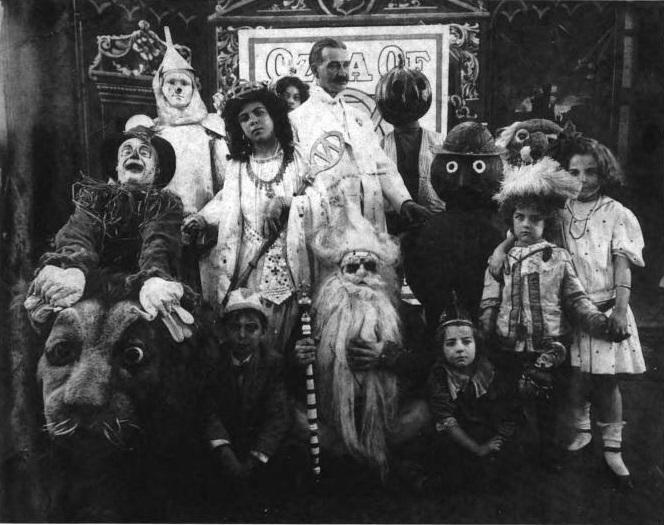 In this picture, L. Frank Baum poses with actors from his Fairylogue and Radio-Plays. Always intent to expand his Oz books into a transmedia franchise, Baum, with this project, created what seems to be a rather unusual media form based on The Wonderful Wizard of Oz (1900), The Marvelous Land of Oz (1904), Ozma of Oz (1907), and one of his non-Oz fantasy books, John Dough and the Cherub.The Fairylogue and Radio-Plays combined hand-colored slide projections and moving film clips with live actors. Baum himself played the narrator in a fashion that sounds reminiscent of popular projection lectures of the nineteenth century, only here he interacted with the movies as well as the live actors. It seems like it was probably as much an advertisement for the books as an attraction in itself. The Fairylogue and Radio-Plays was expensive to produce and to tour. Although it was well-received, it lost money, and the expense sent Baum into bankruptcy. Little more exists of this production than a handful of photographs, a couple of advertisements, and an archived script. None of the slides or films survive, so we'll likely never see those. I am struck by the fact that there are a number of children in the cast, including Romola Remus as Dorothy. I would love to know more about these child actors and how they performed in the show.
Posted by Ryan Bunch at 12:15 AM No comments: