The Humbug of Children's Literature 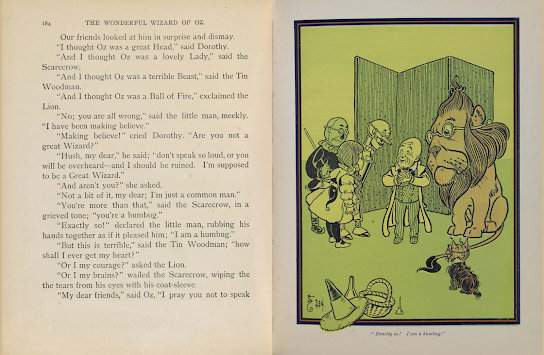 In The Wizard of Oz, when Dorothy and her friends return from killing the Wicked Witch of the West to have their wishes granted by the Wizard, they find out he is a humbug, a circus performer from Omaha, a kind of P.T. Barnum, and not a real wizard. However, they still expect him to deliver on his promise, so he gives Dorothy's three friends brains made of bran, a plush heart, and a liquor of courage. Even though these things are obviously not the real items, Dorothy's friends accept them as suitable for their needs.
Children's literature is like humbug. We draw inspiration from it even while recognizing its fictions, including its fictions about children and childhood. Much has been made of the fact that children's literature is given to kids by adults, positioning children as rather helpless recipients of whatever adult authors, publishers, marketers, teachers and parents allow them to read, and whatever adults want to believe childhood should be. But like Dorothy's friends receiving the Wizard's humbug gifts, kids of all ages may be well aware of the situation. Even as they embrace the stories, they might be aware of them as a kind of performance of childhood and children's stories. They participate in the writing of these fictions, negotiating their relationship to them as they hear, repeat, share, play, perform, and revise the repertoire of children's stories.
Posted by Ryan Bunch at 6:18 PM