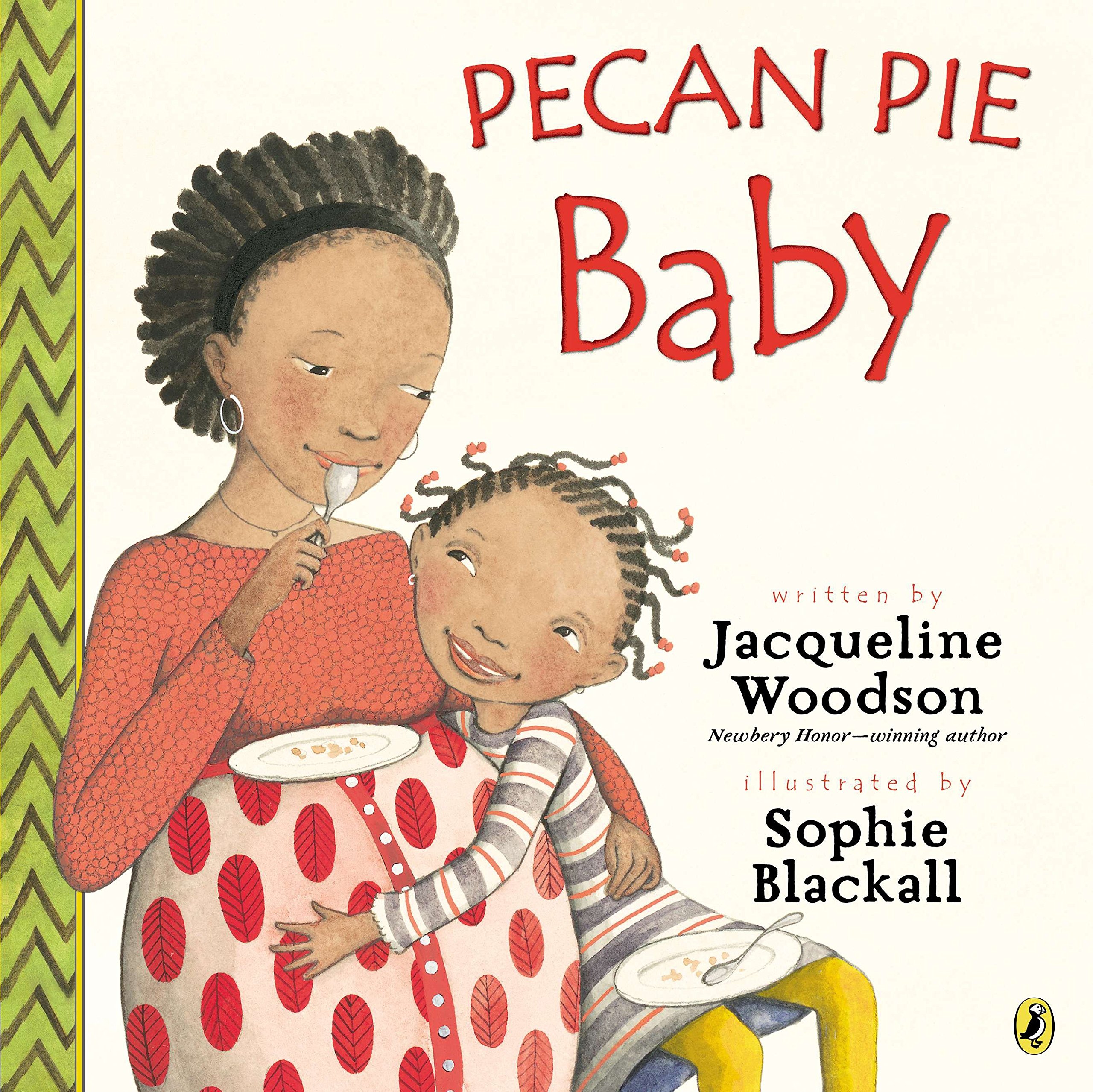 Jacqueline Woodson’s Pecan Pie Baby tells the story of an African American girl, Gia, who is less than happy that she is going to have a new sibling. Aimed at young readers, the book, with illustrations by Sophie Blackall, signals its comforting objective from the outset through its pastel colors and the appealingly round-faced characters. The front cover shows Gia and her Mama in close embrace with Gia’s arm around her mother’s pregnant belly after they have just finished eating pecan pie, the food that Mama uses to comfort Gia and reassure her of her love.

Blackall’s illustrations show the relationship between Gia and Mama, using indoor environments, predominantly the home, and Gia's position within them to show her emotional state. The book opens in the fall with Gia and Mama going through Gia’s winter clothes. Instead of throwing them away, however, Mama boxes them up for the new baby. Gia’s room is always shown from a perspective directed toward the far corner, where her bed is situated. In the first two-page spread, the room appears cozy and lived-in, with mother and daughter smiling as they pack up the winter clothes.

This mood is disrupted in the text, however, when Mama brings up what Gia repeatedly refers to in exasperated larger type as the “ding-dang baby.” On the next spread, Gia looks away from her mother (who is always looking at Gia, no matter what) as she tries to talk to her about the coming baby. In such moments of emotional closeness, Blackwell gives us intimate depictions of the characters with few or no details of their surroundings in the background. The passage of time is indicated by the changing of the season from autumn to winter, which is when, according to Mama, the baby will probably arrive (by the first snow). On the first page, trees in cheerful fall colors are framed by the windows in Gia’s room. After the topic of the baby comes up, falling leaves are foregrounded in an exterior view of Gia’s bedroom window as she looks out hoping there won’t be snow. Framed by the window, Gia looks away from Mama as each falling leaf portends the dreaded winter.

Mama remarks that the baby loves pecan pie, and it wants some right now. Gia says the baby is just a copy-cat, because the two of them love pecan pie. This conversation takes place on the same spread dominated by the picture of Gia and Mama in the window with leaves blowing across the pages toward the substantial paragraph of text. There is some space after this text before the single line, “In the kitchen, Mama cut us a big slice.” Then, in the lower right corner of page, there is a tiny picture of the two of them seated side-by-side at the kitchen table, sharing a piece of pecan pie. Their eyes are glancing toward each other, and there is something stylized, possibly even suggestive of folk art, about the way the hold their spoons against their smiling lips. Because of the unusual way in which they eat with their spoons, one is prompted to imagine the taste and texture of the pie, which has an affectionate place in Southern and African American culinary history as a dessert associated with family and holidays. Such a significant moment in the story might well have been its own featured page. The choice to slip it into the corner of a two-page spread suggests that it is the little things—small gestures of love and acts of bonding—that matter. It also allows room for this gesture to grow larger and more significant by the end of the book. In these first few expository pages, the full story has been prefigured on a small scale.

As time passes, leaves keep falling, and “jacket weather” comes. Gia’s fear that the new baby will ruin life as she knows it intensifies. There is a moment of playful abandon when Gia and her friends play “Mama’s Having a Baby.” As the children jump rope to the traditional children’s rhyme, Gia blends into the crowd—it takes the reader a moment to spot her near the end of the line. At this moment, she is able to play through her feelings of resentment (in the rhyme, the baby is sent down the escalator) without being singled out as the girl who’s getting a baby sibling, as happens during an episode in class.

Soon, however, before even arriving, the baby seems to invade Gia's life, world, and physical space. She worries that her friend won't be able to sleep over because the baby will take the extra bed. Her aunties come to visit, but rush through tea and ignore her to talk about the baby, and her uncles invade her room to put the crib together. In a single-page illustration without words, they have strewn furniture parts and tools all over her room, leaving Gia drawn up in fetal position, backed up into the far corner of her room, small and marginalized. At school, the teacher reads a book about a girl who is about to be a big sister, and in contrast to the anonymity she enjoys in the jump-rope scene, she is encircled by her classmates who all look at her.

There is another moment of reassurance in the corner of the page when Mama rubs Gia’s back during dinner and says she need Gia in response to Grandma’s offer to keep her for a while. This is not enough, though, to keep things from reaching a breaking point at Thanksgiving dinner, when unending talk of the baby sends Gia into such a state of agitation she shouts “I’m so sick of that DING DANG BABY!” 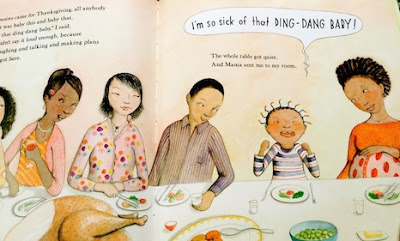 Gia is sent to her room, where she again sits on her bed in the corner. Her loneliness is deepest here, with the lines where the floor and walls meet converging where she sits in a deep recess of solitude as we look down on her from above. The trees in the window have almost completely shed their leaves.

Soon, Mama comes to comfort her. As they cuddle together on the bed, Gia can’t avoid feeling the baby “jumping around” in Mama’s belly, which has grown noticeably since the beginning of the book. An illustration shows that Gia can’t put her arm around her mother without also embracing the baby. As it begins to snow, they go downstairs for pecan pie again. They laugh about how “the three of us loved ourselves some pecan pie!” In the last illustration, Gia and Mama hold hands and look into each other’s eyes while Mama balances a slice of pie on top of her belly. Mama and Gia’s emotional closeness is emphasized by the absence of any environmental details in the background. It is just the two (or three) of them, and at least for the moment ending the book, the bond among mother, daughter, and pecan-pie baby is secure. 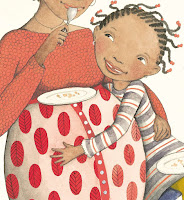