The "America Rock" episodes of the ABC interstitial cartoon series Schoolhouse Rock presented lessons about American history and democracy that were meant to educate young viewers into  citizenship. Schoolhouse Rock used songs in styles of music broadly conceived as rock to help its young viewers remember things like the preamble to the Constitution, adverbs, and multiplication tables. In the case of the nostalgic "America" episodes, a folk-rock sound dominates. The first installment, “No More Kings," opens with an invocation of rock music itself to announce the appearance on the world stage of American democracy:

Rockin' and a rollin', splisin' and a splashin'
Over the horizon, what can it be?
Looks like its going to be a free country.

The song then launches into a narrative of the colonization of the new world describing the proto-USA as a child leaving the nest of mother England.

Oh, they were missing Mother England
They swore their loyalty until the very end
Anything you say, King, it's okay, King
You know, it's kind of scary on your own
Gonna build a new land the way we planned
Can you help us run it till it's grown?

Words, music and image seem designed to tell a story children could relate to. The animation makes the world appear small, so that a ship can easily sail across a small ocean, across which a king can watch his subjects through a spyglass. The Boston Tea Party is represented inside a teacup, which is reminiscent of a child's tea set. The Mayflower and the house, over which people tower, are also toy-like. 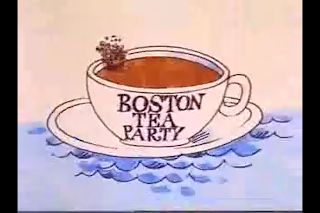 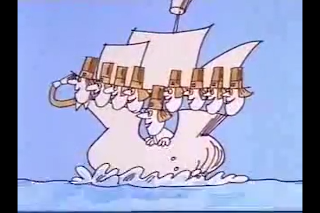 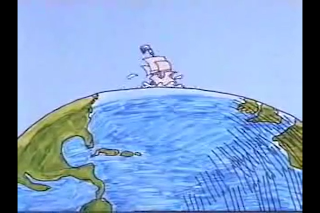 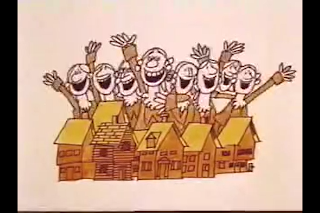 The folksy, guitar-based, seventies soft pop style of the music maintains the childlike affect. Most importantly, the pilgrims are described, like children, as dependent on a mother country. They are frightened to be alone in the world, but swearing their loyalty, they want to build a new land according to their own vision. They need help until, like a child, the new nation is “grown.” And they want the king to be proud of them, just as a child seeks a parent’s approval.  Both the colonizers and the country they found are thus positioned as innocent by being coded as children.


To maintain the innocence of this narrative, however, requires the erasure of those who would complicate it. 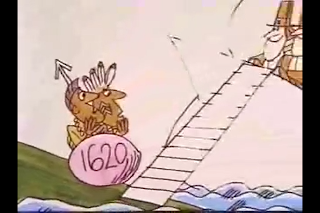 We are told that the Pilgrims are looking for a land to call their own. We of course know that there are already people there, a fact which is not acknowledged in the song’s lyrics, and only marginally acknowledged in the animation as American Indians peer apprehensively from behind Plymouth Rock. The pilgrims simply “planted corn, you know” in a landscape represented by a blank page. There’s nothing to see here, as their crops and houses fill the uninhabited space.

The king himself is presented as childlike, effeminate, and prone to tantrums. His authority is replaced in the end by that of men of reason, the founding fathers who framed the constitution and the declaration of independence. These rational patriarchs must be defined against their opposites—children, racial others and the femininely gendered Mother England. It is probably worth mentioning that the emergence of this species of rational men coincided historically with the emergence of Romantic, innocent childhood. In this and other "America Rock" episodes, the growth of the nation parallels the growth of the child from a primitive state to a mature one. This growth into Enlightenment rationalist Euro-American adulthood is the basis of Schoolhouse Rock's democracy. Children, while they remain such, along with infantalized non-white adults, are excluded. 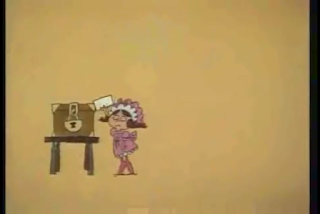