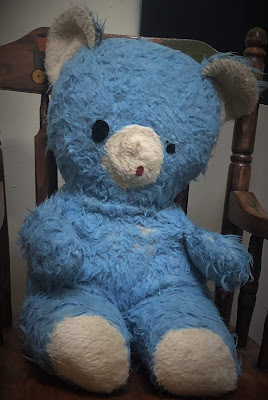 This is Tatters. He's not really in tatters, just a bit worn, but that's his name. I think I was probably about 10 when I chose it. My grandmother had given him to me when I was a baby, so by the time I got around to naming, he was already very much the old bear you see here. On the belief (mistaken, it turns out) that he was the most senior stuffed animal in Bunchville, he was about to be crowned king, and I thought he ought to have something fairy-tailish to go with the title.

So I flipped through a copy of Joseph Jacobs's English Fairy Tales that had found its way to my little bookshelf after belonging to one of my much older siblings. I came across the story of Tattercoats, a Cinderella kind of girl in rags who becomes a princess, and the image struck me as fitting. It never for a minute occurred to me that my blue bear might be a girl, and I'm pretty sure I played with the idea of adapting the name as Tatterpants, but I settled on just Tatters, maybe because it was simpler or maybe because he didn't have pants. So King Tatters he was for awhile, and after Bunchville became a democracy, just plain Tatters.
Posted by Ryan Bunch at 5:46 AM